Create an Account - Increase your productivity, customize your experience, and engage in information you care about.

The culture of Native Americans is visible throughout Klickitat County. The county is the north shore home to 10,000 years of native American habitation concentrated near Celilo Falls, which was a major Native American fishing and trading center on the Columbia River. Klickitat County was also the delineation point where two major and very different Native American language groups, coastal Chinook and interior Sahaptin came together. As with the interior plateau Nez Perce guides for Lewis and Clark who traveled with the party only as far as Celilo Falls, this linguistic and tribal boundary was seldom crossed.
With a treaty signing in 1855, most of the bands along the Columbia became part of the Confederated Tribes of the Yakama Nation. Along the Simcoe Hills, the southern part of the Yakama Reservation is in Klickitat County.

To celebrate the coming of the first roots, such as camas and wild celery, and in honor of the annual return of the salmon, Native Americans still hold pow-wows. Two notable powwows are held in the eastern part of the County, in March at the Rock Creek longhouse and at Roosevelt in August.

A mile upstream from Lyle, the Klickitat River narrows into a chute where Native Americans still dip net for salmon and steelhead from precarious scaffolds perched above the rapids.

Horsethief Lake, near Dallesport, showcases the area's best Native American petroglyphs, including "She Who Watches." This renowned petroglyph can be viewed on guided tours offered through Horsethief Lake State Park.


View our Directory of Museums and Cultural Attractions to find area museums, galleries, and other cultural attractions. 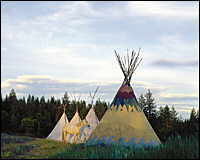 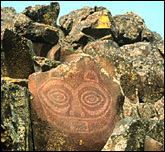